An Interview with Young Historians; Aleema Gray and Amelia Francis

Aleema Gray was born in Portland, Jamaica and came to Britain as a child. Being born into a Rastafarian family, history has been central to her cultural development. After completing her BA at Royal Holloway, University of London, Aleema was awarded a scholarship to study Migration and Diaspora Studies at the School of Oriental and African Studies, University of London. Her research focuses on the British Rastafarian community under the wider rubrics of identity politics. After finishing her masters, she now works independently between Britain and Jamaica.

Amelia Francis was born in Kent, England and is of Caribbean and British heritage. History is a subject she’s always been passionate about, as it has been a useful way to connect with her heritage. Amelia is currently in her second year of studying for a BA in History at the University of Chichester, and she looks forward to continuing to a master’s degree and stepping into a career as a historian and journalist.

Tiffany Florvil: I see that the Young Historians Project team is working on a project entitled “The Black Liberation Front.” Could you explain this project in more detail, particularly its main focus and significance?

Aleema Gray: The project focuses on political activism in Britain through looking at the experiences of the Black Liberation Front. The BLF was a group established in the 1970s to consolidate political black identity and challenge the impact of racism in Britain. As part of the project, young historians will develop a wide range of skills to harness their interests in history. An important part of the work that we are doing is trying to have some sort of impact on some of the preconceptions about history within the African and Caribbean communities. Black history in Britain is always seen as happening somewhere else—whether it be the United States or South Africa—so this project is important because it allows us to tell our story. Groundbreaking groups such as the BLF are not seen as a part of British history within the national curriculum, so we are hoping that we can impact positive changes that will pave the way for a more inclusive approach to British history.

Amelia Francis: Through highlighting this organization’s story, an aspect of history that has been excluded by the narrow avenues of Britain’s school curriculum will be given the appreciation it deserves. This is an important responsibility, as the History of Black activism especially tends to conjure images that aren’t so inclusive of Black British movements. What’s proved through highlighting the work of the Black Liberation Front is that movements such as this not only existed, but made a huge impact, and that warrants recognition.

Florvil: It is remarkable that the Young Historians Project includes the participation of young people from the ages of 16 to 25. Can you explain why you became involved with the YHP and what you have gained as a result? Do you see your work with YHP as a form of activism?

Gray: My involvement began at the History Matters conference in 2015, which sought to open a conversation about the shockingly low numbers of people of African and Caribbean heritage studying history at a higher level. As a young black woman studying history, you cannot help but feel a sense of displacement not only in a visual sense, but also in terms of the narrative that’s being told. At the time, I found it extremely comforting to know that there was a small network of black British historians who all shared the same concerns. We identified that the problems facing black historians are structural issues that could be tackled socially. It was through this open dialogue that we founded the Young Historians Project.

YHP could be seen as activism in the sense that we are trying to bring about changes. YHP is a process of becoming that looks at Britain as it could be as opposed to as it is. However, I think it is important to move away from this idea of activists as being a fleeting, idealistic separate community that serves its own interests. YHP are providing short- and long-term solutions to structural issues that affect everybody. We are an educational scheme, empowering people through looking at history. So, I would say we are the History Revival.

Francis: I first became involved in the project in December 2016, so it was already up and running when I joined. My lecturer, Hakim Adi, mentioned the project and asked whether I would be interested in it. Not only did the project regard an aspect of modern Black British history that I am drawn to on a personal level, it felt like a great way to actively explore history in a different way than I had done before, in terms of participating in a unified team. I definitely think YHP and its initiative is a form of activism. The premise of YHP is to challenge the marginalization of young African and Caribbean descendants who are systemically notified that History is not representative of their heritage, which corrupts the relationship young people have with History. So, the YHP, in connecting young people of African and Caribbean heritage, is seeking to repair the damage done.

Florvil: What are the tasks that the team has completed so far for “The Black Liberation Front” project? What will be the final outcome of this project? Will there be a digital component that educators could potentially use in their classrooms?

Gray: History is dynamic and I think this is reflected in the work that we are carrying out. We will be producing a short documentary based on our interviews with members of the BLF and curate an exhibition that will be showcased at different schools in London. As part of the exhibition, we will be giving out copies of the BLF’s Grassroots newspaper. So far, we have undertaken archival, film, and oral history training at the Black Cultural Archives and we have completed 8 interviews. We are entering the third phase now, where we will be focusing on editing the film and organizing the exhibition launch. It’s a lot of hard work, but it’s also a lot of fun.

Francis: What’s really exciting about YHP is the methods used to showcase history. So far, we young historians have already been given opportunities to learn and practice skills that come along with film-making. The documentary will feature interviews with members of the BLF, many of which have already been filmed. As the history of the organization is told through their first-hand accounts, we have gained the useful skill of oral history practices. Editing experience will be something else to put under our belts. Another outcome of this project will be the exhibition, curated by the YHP team, to be showcased in various schools in London.

Florvil: What has been the reception of the Young Historians Project so far?

Gray: It is amazing the support we have had so far. We have received funding from the Heritage Lottery Fund and managed to partner up with the Black Cultural Archives, which has really helped to communicate our message to a wider audience. The reception we have had from young historians has particularly been incredible. When we launched our website and digital campaign, we had so many requests from researchers and students, voicing their experiences and asking to be a part of the movement. The positive response has really helped to confirm the need for initiatives likes ours and has motivated us to be more courageous and bold in the work we are carrying out.

Francis: It’s been all love. Support and encouragement are the words I think best describe the reaction this project has had. What’s also been especially inspiring is the help and appreciation those BLF members we have interviewed. Then there is social media, which has been an excellent tool to receive a feel of the supportive vibes coming our way. Not to mention that one of the main aims of the YHP, to engage with young people of African and Caribbean descent, has definitely been realized—we have a waiting list at the moment of people who want to come on board.

Florvil: Does the YHP have any additional plans for national, continental, or even transatlantic collaborations? If so, with whom and with what institutions? Do these efforts at collaboration also include the organization of additional conferences and workshops?​

Gray: Absolutely! Our motto is “Each one, teach one” so we are always open to collaboration with other international groups carrying out similar projects. At the same time, I am particularly interested in developing and strengthening the work that we are doing here in Britain through collaborating with schools in our communities. I think it is important to keep our feet on the ground and commit to a “bottom up” approach. It is very easy to get caught up in the spectacle of it all, but we have a mission and we have to remain focused on what we have set out to do so nobody gets left behind.

Francis: The world is our oyster, for sure. There are so many great reasons to connect with continental and transatlantic groups similar to YHP, and being in the era of social media I’d say this is highly likely. This would aid the feel of encouragement and unity felt by the YHP and similar groups around the world. However, I do think the essential focus will always remain on achieving changes in institutions here in Britain, in terms of the national history curriculum and the number of young people of African and Caribbean heritage being attracted to History, and not to spread ourselves too thin.

Florvil: Where do you see the YHP in five to ten years?

Gray: I hope to see the YHP incorporated in the national history curriculum as external consultants. Learning is not one-dimensional and it is time that we understand how important it is to make sure that young people are informed about their past so that they can be the changes that they want to see in the world and become a part of the global village.

Francis: I see the YHP as continuing to be a kind of training ground, if you like, for those who will go on to spearhead the expansion of Black British History.

Florvil: What advice would you give to other young historians from Black European communities who may want to establish similar initiatives?

Gray: I would say just do it! Get involved! Read more! Never stop learning. Never stop searching for knowledge. Never allow anyone to put you in a box. Be radically vulnerable and always ground anything you do in education. If not for yourself, for the next generation.

Francis: I would say dive in. If not you, who? In the example of the two-dimensional state of European Histories, I would say this is the case, but it doesn’t have to be, and you are capable of changing it. Always search for ways of becoming more aware, and for others who have the same determinations.

2: The impact of the media and Imperialism on our understanding of the NHS and African contributions 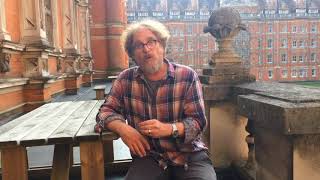